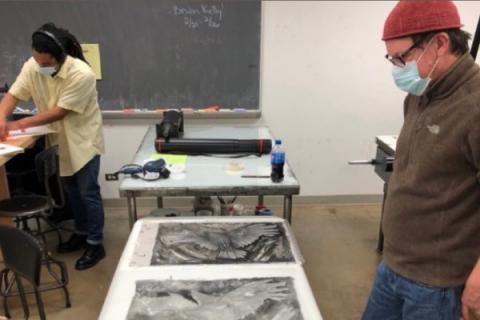 Brian Kelly received a M.F.A. in Printmaking at the Louisiana State University, a B.F.A. in Printmaking from Northern Illinois University, and a Certificate in Waterless Lithography from the Tamarind Institute of Lithography. Professor Kelly serves as Head of the Printmaking program and is Coordinator of Marais Press at UL Lafayette. Kelly holds the Universities Coca-Cola/BORSF Endowed Professorship and has been recognized as a University of Louisiana at Lafayette University Distinguished Professor in 2010 and a UL Lafayette Eminent faculty for Leadership and Service in 2017.

Kelly has presented and conducted over 46 printmaking workshops and lectures concerning printmaking research in the United States, Mexico, and Canada, and has held residences at the Tamarind Institute of Lithography and GLATT/YMAGOS Atelier in San Paulo Brazil.